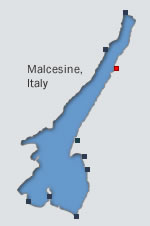 Malcesine was long a battlefield between rival powers in its position commanding the eastern side of Lake Garda with the important control over land access north and south.

Remains have been discovered from the days of the Etruscan settlers and the burial plots near the mountains are thought to provided one version of the town name (the other theory is that Malcesine refers to the rock in the area).

The castle (more information below) is an indication of the importance of this strategic point many centuries ago. The main fortification of the area took place under the Lombards and then the Franks in the 9th century, who extended the castle and built the city walls. 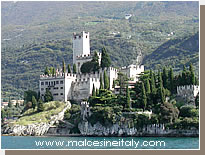 Scaliger Castle
The impressive Scaliger castle on a promontory above the port of Malcesine has a rich history. The site was originally fortified by the Lombards followed by the Franks and the Bishopric of Verona. It's current "look" shows the Scaliger influence from the time in the 13th and 14 centuries when it was controlled by the Della Scala family. It has now been declared a national monument and it is possible to visit both the castle and the Museum of Natural History (covering the coast and Monte Baldo) which is located inside.

The Bishops of Verona, and later the Della Scala family, took over control before it passed into the hands of the Venetian land empire. Under the Venetian rulers the confederation of lake settlements was created: the Gardesana dell’Acqua. The Captain of the Lake had his headquarters in Malcesine in the Captain's Palace which still exists. 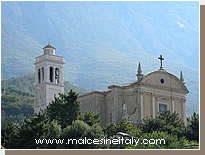 Church of St Stefano
The church of St Stephen (the patron saint of Malcesine) is visible from the lake in its position above the main town. A religious building has stood in this position for centuries - originally thought to be the site of a pagan temple, the first Christian place of worship was constructed in the time of the Franks. The current baroque building dates from the 18th century and houses the remains of two local saints, St Benigno and St Caro, who were reputed to have lived in a cave at the foot of Monte Baldo.

The decline of the Venetian Serenissima was sealed by the French invasion under Napoleon and Malcesine again stood as a border post for different sides during wars with French and Austrian participation. 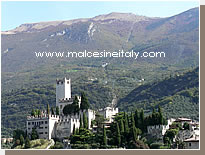 Monte Baldo
Monte Baldo, the mountain behind the castle in the picture to the left, is a main centre for active sports in the area. Mountainbikers, walkers and paragliders flock to it in the summer, while it also has ski runs open in the winter time. It is reached via the cable cars run from Malcesine (the summit at just under 1800m can of course also be reached on foot) which boast a revolving cable car with a panoramic view in all directions. More information about the lifts is available at the Funivie del Baldo website.

Malcesine was already a popular tourist destination - Goethe (who spent time locked up for sketching the castle during a particularly tense period) and Klimt (who painted settlements on the eastern lakeshore by means of a telescope) were both prominent visitors - but tourism boomed once the Gardesana Occidentale road was built along the eastern side of the lake.